INCLUSION – A Kaleidoscope of Diversity

A new stage performance of George Orwell”s “Animal Farm” by Centre for Film and Drama (CFD) in collaboration with Snehadhara Foundation was performed at Rangashankara, Bangalore on 21st & 22nd October 2015. The 18 member cast of the play included  children from Snehadhara, a few children from other schools and a cast of theater artistes and adults from various walks of life.

What I saw at Rangashankara on the first show : 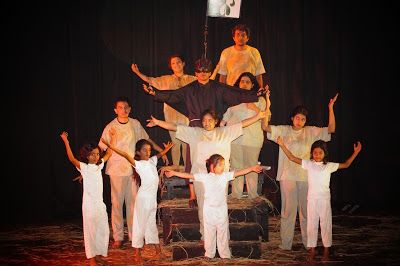 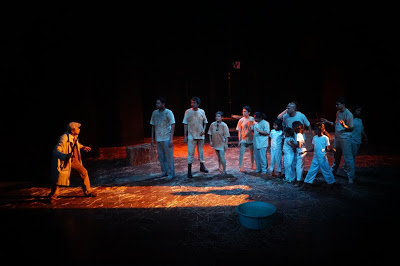 A palpable excitement in the Snehadhara family. A familial pride devoid of results or outcomes. Having been though the process with the children in many ways, there was a delight in their participation. And through the performance, a wonder at how each child maintained his/her own in the midst of an alien experience.

The audience responding with joy and natural warmth. Of course the family members whether from the Centre or personal, carried their own emotions but others too seemed affected by the energy of the space that connected them to the performers. The patterns of the audience were a testimony to the fact that no special concessions were made to the performers as the usual annoying interruptions and cell phone usage continued to be a part of the occasion. There was curiosity, expectation, laughter, emotions generated by the flow of the play-all ensuing as always.

The children, first the audience- some were curious-questions were asked (But why are the animals sad?), observations were made (Are all the children from the same school, do they have holidays too, Oh they are all different ages, why did she die twice?) yawns were not stifled (I am bored..) and hunger was proclaimed (its late, can we go to MacDonald’s -we can’t go home and eat).

There were other children too, in the audience. They did not say much but they did absorb the sense of gravity required of them in the space. If they were disconcerted by the darkness, the play of lights, the loudness, the changes, they revealed little through their manner and voice. What went in, what would come out was irrelevant.  Untouched by expectations yet responding to the demeanor demanded by the space, and its energy. Where did it come from? And are we surprised? Should we be surprised? Can we take it in our stride; accept it as natural, truly within us, that extraordinary times will yield extraordinary results from everyone- equal or more equal alike? Where do these reserves of patience, calm, resonation of the space come from? There is no dictation  or engineering here….

And then I saw

The artists. Their entries, their exits, their presence, their songs, their movements, how they allowed the space to dictate to them and humored that dictate with aplomb. How they bore the interminable wait in the wings, how they knew within themselves that this is what is required of me at this instance and I can do it without a sense of ‘cause’, ‘effect’, ‘should’,’must’, ‘have to’,. How just being in the flow guided their beings and despite staying immersed in their own selves they became an integral part of the whole montage.Weeks of labour, yet unattached to its result. No sense of ego or pride or performance to motivate or enhance the final presentation. Just to be in the moment, with awareness, an organic, innate feeling that this is somehow important to me, to the world around me.

What needs to be challenged here? My beliefs of what I am capable of with the children or what they are capable of with or without me or what peaks can be scaled if I allow myself to look beyond use of words like ‘skills’ and ‘abilities’ so loosely? My attachments or detachments to the human experience in all that it is capable of and does not know it. My need to be ‘included’ in the wonderful world that is not governed by rules that we seem to understand and stand by. A world that is constantly telling me to dig deeper, yet step lightly.

Inclusion is not integration

We can’t do a little of it

Either it is, or it isn’t

Its not building an extra of

It is being in the one that is

A kaleidoscope of diversity